I didn’t anticipate my Madeleine to be so – unpleasant. With a rib-rattling sneeze a wallop of mucus flung from my nose, and I was instantly transported back to the brothel Bucharest.

Hot tea and cake is so much more delightful to yield a relaxing reverie. But I suppose you can’t be picky about sensory stimulus! So here is the result of last week's writing exercise: 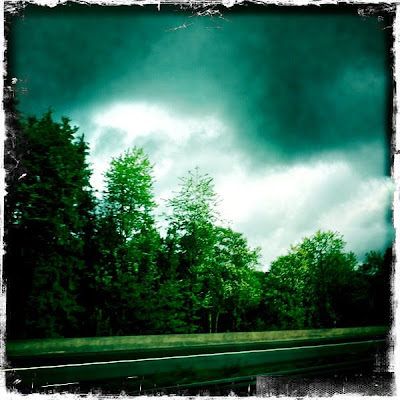 Bucharest
I lay on the floor of my tent in a sweltering fug of fever. Lashing rain drowned out my haggard cough. I fidgeted, fighting to get comfortable. I finally flung off my sleeping bag, only to retreat under it moments later. A platoon of mosquitoes laid siege. We were camping in a poorly drained swamp. Even without a fever the air hung like a soppy, hot towel.

We had pulled into Bucharest earlier in the day. We pitched our tents in a campsite in outskirts of the city. The campsite used to house laborers during the communist era. A handful of original plywood huts still stood. They had since been tarted up with bright paint. We were later told that that wasn’t the only tarty behavior.

Campsites have a less then savory reputation in Romania. After the Iron curtain fell, these types of huts were sold off for private enterprise and turned a fine profit when rented by the hour.

This particular campsite was built on the edge of an industrial estate, a forty-minute bus trip from the city. We eagerly pitched our tents and set to work washing our filthy clothes in the bathroom sinks. Giggling at the strategically placed massage tables in the toilet sheds. Not yet knowing about the campsite’s avenues for revenue.

With everything washed, we negotiated with each other for space in the campgrounds backfield. We hung our wet clothes from fence posts, tent guide ropes and trees branches. The field looked like a launderette had exposed. We were immensely satisfied. Everything was washed. We failed to anticipate the impeding rain.

It wasn’t the rain that broke us. Bucharest broke us. As we eventually drove any from the wretched city we were weary and unwell.  My lungs were still a cesspool of mucus; everyone else had hangovers from a night on the city’s wild side. I suppose I haven’t explained very well why I’ll never return to Bucharest, that’s for another time. I highly doubt anyone else I travelled with would return either. I guess I risk the possibly of returning to it whenever I have a heavily laden sneeze.
Posted by Fi at 9:08 PM