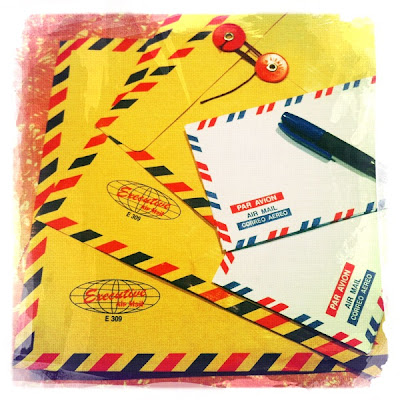 Whilst on the road I followed a fairly haphazard approach to journaling; fluctuating between overzealous devotion to showing less commitment then a one-night stand. Thankfully I kept more than one style of journal. Besides the ol’ fashioned notebook, I was far more successful at journaling via postcards.

Before leaving I promised everyone from street cleaners, to hairdressers to the little old woman up the road, that I would send them postcards from every country. That was before I discovered the cost of postcards and stamps. So I pretended that I never make such promises, and instead sent endless emails to the promised. My pennies were spent on (cocktails and art) postcards to my bombastically charming Irish grandparents* and parents.

My parents thought I was just being conciseness in updating them in my whereabouts. My siblings thought I was boasting about my endless summer. Nope, I had far greedier intentions. To sooth my inner scourge, I crammed these tiny pieces of cardboard with long-winded stories, so they became diary entries on the fly.

But other then recording my trip, I discovered that I truly enjoy correspondence. I’m enamored by emailing and putty with postcards. Since returning home my journaling has fallen by the wayside in the most dramatic fashion** so I’m resurrecting my commitment to correspondence. I’ve bought a stack of envelopes and I’m going to aim to send at least one letter a fortnight****

Knowing that writings about my day/life will have an audience (including a nosy postman) is enough for me to put the extra effort in making stories interesting, readable and grammatically correct. Elements I can guarantee are severely lacking in my journal!

*Who are STILL running a farm in their nineties – if that doesn’t give me confidence to abuse my gene pool every weekend don’t know what else will.

** More like fallen into a gapping hole of oblivion – akin to Gandalf plummeting into the depths of Moria in ‘The Fellowship of the Ring”. Yup a LOTR reference, I’m totally zer***

*** And I’m clearly far too addicted to urban dictionary and footnotes (seriously footnotes IN footnotes?!)

**** Yay for semi-realistic goals! Pft imagine if I claimed I would send one letter a week – we all know that would be an outrageous lie!